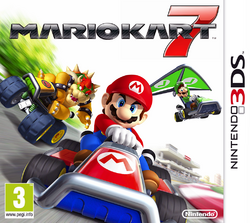 Mario Kart 7 is the first Mario Kart game for the 3DS. The Game uses the 3D function for a very nice look and an in-depth experience in racing. The game is also the first Mario Kart game to customize your karts. You get 8 different race cups ranging from the Shell Cup to the Leaf Cup and more. You get the usual 20 new race courses and the 20 remade courses. You also have the ability to pick up coins for speed, a maximum of 10 being allowed to hold. Coins are also how you can unlock new Kart parts. The game is the first game to be able to actually fly with your Kart gliders, or you have an underwater propeller for underwater portions on a course. There are new items such as the Tanooki Leaf, Fireflower and the Lucky 7 powerup. Several characters make their return in the game such as Koopa Troopa, and Rosalina and some new characters are added. Such as the Honey Queen, Wiggler, Shy Guy, and a Metal Version of Mario, that's not all though. You have the standard Grand Prix option, as well as Time Trials and Battle mode, Unfortunately VS. mode does not return, it only appears in DS download play. You get the standard 50cc, 100cc, and 150cc engine classes and the 150cc mirror engine class which you unlock after finishing the first 3.


The Game has WiFi capability, such as online play, LAN Play and 3DS Download play. Online play features just racing with people around the world. You can also play Battle modes like Coin runners and Balloon battle, and you now have the option of community racing.

*Note A patch fixing the online usage of shortcut exploits such as the Wuhu loop and the Maka Wuhu glitches. It is required to have the patch to play online.
*Side-Note We have our own Mario Kart 7 Community Code which we will release soon.

There is also the option to use the Gyro controls to drive by tilting the 3DS system, however it might make using the 3D on the system useless due to it needed to be stationary for it to work. Hori made a nifty little accessory for the Gyro Controls to get a better use and simulation of driving with the 3DS (Full on Review of the Mario Kart 7 Wheel can be found in the Product Reviews Section).

There are some minor issues with the game with the 3D, such as the occasional ghosting of an item (silhouettes of the item being displayed on the screen) but this doesnt really matter as it doesn't affect gameplay and is hardly noticeable. 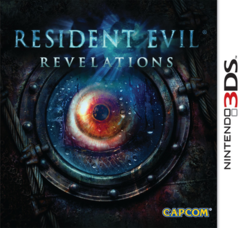 This is the second Resident Evil installment on the 3DS. This is also one the first games to utilize the Circle Pad Pro Accessory (See product reviews for more info on accessory). The Game starts out as the player playing as Jill Valentine and her partner, Parker Luciani. You two are sent on a mission to investigate the disappearance of Chris Redfield on the ship the "Queen Zenobia". The game has you playing different missions as new characters added to the game and the story line is well done. But i wont spoil anything for you. Along with the Campaign, you are given an Awards system which is similar to the Xbox 360 and PS3 trophy system, and when unlock an award you can redeem it in game for useful perks, such as a higher level shotgun, new  Raid Mode missions (We'll get to these in a second) and campaign perks and challenges.

The Raid Mode is a solo or multiplayer objective based game mode where you and a partner go through campaign missions searching for a boss to kill or a Gold Medal. Raid Mode is playable online, you are given a shop to buy better weapons and weapon parts and mods. The game also uses the 3DS play coins feature to buy really good items that your BP cannot. You earn BP by completing missions or chapters, and by doing well and by performing amazing feats in Raid Mode such as getting a high kill/ damage count, Taking no damage during a single Raid Mode mission or by have a 100% accuracy. There are some new features to this game such as being able to move around while using the laser sight, and customizing the laser sight color from red to blue to even green or white. Also you get the ability to make your own vaccines by reaching 100 on the new Genesis Scanner. The Genesis Scanner allows you to scan the enemy known as "the Ooze", which are mutated humans infected by the new T-abyss Virus. You fight a wide variety of intimidating to freakishly frightening ooze. The bosses are not pretty and certainly no pushover either. You will constantly be fighting new ooze and constantly be searching for ammunition. The game is also pretty creepy and can feel claustrophobic.

Also for a cool performance perk, get a pair of headphones with good sound to it. Like toxix Ear pollution, or skull candy, or whatever gaming headphones you prefer. It will make for a fun experience. 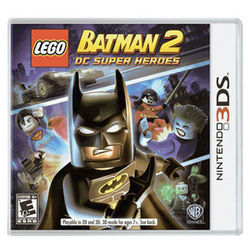 This game has its pros and its cons. The game has decent game-play and has funny moments and the replay value is good. However there are many flaws and such to it. First off the Sound quality is very lacking, it sounds too compressed. The cinematics are not in  3d, and they look like a video ripped off Youtube  and downloaded onto a portable device. And the 3D is very disappointing, there isn't any depth or any eye popping videos, it just looks like your playing a game through a window. . However if you can get past these disappointments, the game can be very fun. You can play as various super heroes from the DC Universe, such as batman and robin, also Green Lantern, The Flash, Wonder Woman and more.

Once you have the main game finished you can play survival like modes in the Justice League modes, or you can go back in the free-play mode through previous missions using different characters to get different collectibles you couldn't get in the first campaign run. You can get collectibles such as characters kits, Red Blocks that unlock certain game changer perks, and Sound bits.

The Game Story wise is well done, it features villains such as The Joker, Lex Luthor, Harley Quinn, Riddler and more. The game has its moments, such as funny dialog, interesting moments and etc.

So overall Despite the disappointing audio and visuals, this game has a lot to offer. 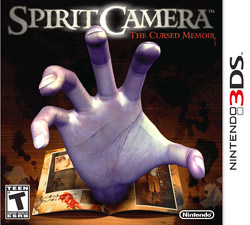 Spirit Camera: The Cursed Memoir is a spinoff of the Fatal Frames Series. The game takes full advantage of the 3DS's gyro sensor capabilities and also uses its AR (augmented reality) capabilities. The game has an interesting story, but however is kind of a disappointment.    There are some perks to this game such as Minigames, spirit photography (we'll get to in a moment), and the game comes with a "Diary of Faces" AR book, which is required for the games story mode, and mini games. Spirit Photography allows you to take ordinary pictures in 2d or 3d or a random image with the 3DS cameras, and the game puts a  different amount of creepy images into the your picture, and allows you to save it to your systems SD card for sharing via Facebook, swapnote, or whatever you would like. The pictures usually either contain a picture of a girl, a creepy looking hand, an angry spirit, and sometimes 2 creepy animations. the game also lets you take pictures of whatever and use it as a face for the angry spirit you will fight in the game modes spirit fighting game mode.

Truly, this game could have had allot more potential, but it just doesn't have the fun you would expect. And certain problems with it kill the mood and atmosphere of the game. such as you have to be in a well lit environment for the AR to function right, which kills the mood for a dark creepy game. If it had a lot more content and didn't have these problems it could be allot more enjoyable. 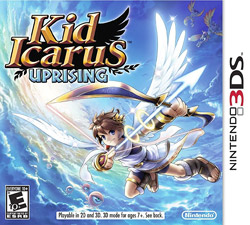 Kid Icarus Uprising is the third and Final installment in the Kid Icarus Franchise. Before we go into details of the actual game, let me tell you about the Packaging and what you get with this game. First off you get a special type of box that comes packaged with the actual game with case, You also get a Nintendo 3DS Stand for use with the AR Cards you get also with the game. Also when you open up the actual case, you can see faces of the characters inside the box. Such as Pit, Goddess Lady Palutena, and Medusa.

Now Lets get on to the game itself. First this game has Gorgeous 3D display, graphics, and the sound quality is fantastic. The Story line is well done and very well executed. The game has good combat mechanics and very well done landscapes and levels. The game has funny moments, heartwarming moments, breathtaking moments, and moments that make you feel sad, all these just pull you in and make it hard to put the game down. Plus the optimism of the protagonist Pit, makes you feel like you you can take on anything. The Stunning environments are a true gesture as to showing what the system is capable of, plus this game is very fast paced so there aren't that many slow moments that just bore you and make you want to put the system down or pick a different game.

The game also makes references to previous Kid Icarus games and other Nintendo Franchises. You can also obtain new weaponry and either choose a new weapon or combine 2 awesome weapons into making one genuinely awesome weapon. The game features online play also and 2 modes such as "Light vs Dark" and "Free for all", you can use your weapons and powers you obtained in the Main Story in the online play as well. You can also go into the gallery and check out idols, weapons, music, etc. You can also change the soundtrack for each menu.

So overall, Kid Icarus is a great game and worth the money you pay for it,