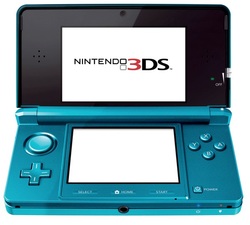 The Nintendo 3DS is a handheld gaming system by Nintendo. The system features the same features as the previous versions of the Nintendo DS line. It has several new features. Such as the glasses-free 3D Top screen with 3D depth slider. Gyro sensor capability, improved friend system, a new notification tab, the option to make in game notes, improved internet browser and a built in pedometer. The pedometer feature is a feature used to encourage the systems StreetPass feature(We'll get to that in a moment) The pedometer measures your footsteps and then registers it via the Activity Log application that comes installed on the system (also get to that in a moment) Every 100 footsteps you earn tokens called play coins which can be used in certain games to buy special content and whatnot, you can earn up to 10 a day and a total of 300.

Examples of Games that use Play Coins are

The StreetPass feature is a social feature by Nintendo which if your 3DS system on and its in your pocket or whatever you carry your stuff and your systems WiFi switch is on, you can pick up Streetpass data such as their Mii, their gaming information and add them to your Mii Plaza. Also you'll get a green light on your systems LED, There are 4 LED settings

The Game comes with several preinstalled titles including games that use the gyro sensor function. Also you'll get a set of AR (Augmented Reality) Cards for the AR Games app it comes with

The 3DS also allows you to access downloadable games through the 3DS marketplace otherwise known as the Nintendo Eshop. The eshop allows you to download Nintendo DSi Ware titles, 3DS Game titles, game demos and allows you to get updates of games and such with Video Updates from Nintendo called "Nintendo Direct".

The 3DS is capable of taking pictures in 3D and 2d with the two cameras facing the front, the 1 facing you is only capable of 2d however. You can also make 3D videos with it, and in interval, stop motion, or a montage. You can even view images, and videos through the Nintendo 3DS Camera App where you can also view images you have saved on to the SD card through the Internet Browser. You can also use your 3DS as a sound recorder and mp3 player with Nintendo 3DS Sound, where you can make 10 second recordings and edit them with all sorts of sound filters. such as making it sound like your talking in a tunnel, or in a radio. You can also manipulate your music which you have stored on the SD card, you also can manipulate the background on the topscreen with interactive backgrounds, like flying a shop and shooting colored tiles with the circle pad and the L and R Buttons, or keep a soccer ball in the air. The 3DS sound app is full of plenty of features.

The 3DS also supports the Virtual Console Service which allows you to play Classic games on your 3DS like Super Mario Bro's , The original Metroid, and many others. You can play any game from NES to GBA.

In case your wondering, yes the original DS, and DSi games are backwards compatible with the 3DS, but they will not be viewable in 3D.

The Home menu also has the ability to add folders to your  menu for easier organizing. You can rename and edit your folders. For exaple you can make a folder and label it "Virtual Console" and add up to 60 Virtual Console Games there. You can make any kind of folder you want and add whatever game you want and name it whatever you want. Its all about organization and your personal preference.

The 3DS is also capable of updating its games through the patching update.

The Sony PSP is the first portable gaming device by Sony. The PSP is capable of WiFi, multimedia support and  gaming. You can use the PSP for internet access also, however it does not have Flash support. The PSP can play videos in MPEG-4 (.mp4) and AVI codec. It also can play MP3 files, and AAC audio codec. It can also be used to read digital comics and view images in a wide variety of picture formats. The PSP is also able to use the PlayStation store and use PSN (Playstation Network). You can use the store to purchase and download, comics, PSP themes, PSone classics,   PSP games, and more.

You can use the WiFi to obtain firmware upgrades (can also be done with UMDs). 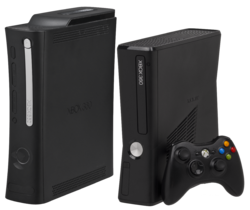 The Microsoft Xbox 360 is a home console designed for gaming and in some respect family entertainment based around a small controller consisting of two joysticks an A,B,X,Y layout with A left bumper and trigger and right bumper and trigger, with capabilities to be both wireless in wired coming in multiple sizes and colors of varying shades.
The Xbox 360 hit store shelves on November 22 2005 in the U.S. and Canada as well as December 2 in 2005 in Europe, with it being released at December 10th 2005 in Japan. It is the successor of the popular console known as the Microsoft Xbox, making it the seventh generation of Microsoft's consoles line.
The current up to date xbox runs the following Tech:  3.2 Ghz Power pc tri core Xenon, 512 MB of GDDR3 RAM cloaked at  700 MHz, 500 MHz ATI Xenos. In later time the Xbox 360 would come to feature a product know as the Xbox Kinect described as a controller free gaming experience by its creators. its release being November 12 2010 and was announced at 2010's E3 convention. It features an online system known as Xbox live that can span a good portion of the world to allow players to go head to head or to cooperate if need be.

Review by Acker, Edited by BansheeTK 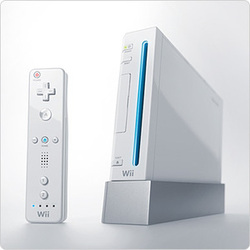 The Nintendo Wii is a revolution in motion gaming at the time of its release. With a wireless "Wiimote" and many family oriented games, Nintendo released this console on the date of  November 19 2006 as Nintendo's 7th gen console to compete with the 360 and PS3. Nintendo hoped to create a more family experience in mind for the players with it, a plethora of multiplayer games and minigames featuring such iconic characters as Mario and Luigi.  A current up to date Wii unit runs IMB power based Broadway, 512 MB internal flash memory, ATI Hollywood.