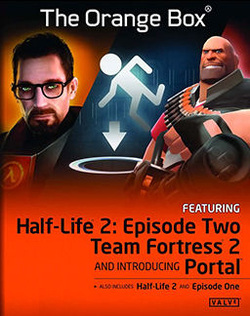 The Orange Box is a Game Package from VALVe Software containing 5 (Well Technically 3) Games. It has the popular FPS "Half-Life 2" as well as both episodes 1 & 2. It also features the popular puzzle game "Portal" and the Vastly popular (Now Free to Play on VALVe's Steam Gaming Client) Team Fortress 2.

Half-Life 2: You play as the famous Theoretical Physicist Gordon Freeman. You are humanities last hope at stopping a Totalitarianism Alien Government known as the Combine with aid by your partner Alyx Vance, a resistance team, and aliens called Vortigaunts.

Portal: You play as a woman named Chell and you are a test subject at Aperature Science. Use the Aperature Science Hand Held Portal Device (ASHPD) or Portal Gun to solve a wide variety of puzzles.

Team Fortress 2: The popular multiplayer FPS Game. Here you can play with 7 different Classes Ranging from a Scout, a Heavy Weapons guy, to a Medic, or even a spy. Defend territories, your army intel, and much more.