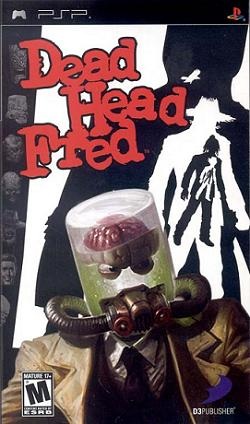 Dead Head Fred is a game for the Sony PSP, released in 2007.

Dead Head Fred takes place in Hope Falls, New Jersey, a once-prosperous area based on American cities in the 1940s. The City began to decline after a business mogul named Ulysses S. Pitt takes over.

You take the role as Fred Neuman, a hard boiled P.I. who wakes up in the lab of Dr Freidrich Steiner and learning of your death and resurrection and the loss of your head.  You learn that Pitt has you killed you and stolen your head, leaving with only your brain, eyes, "jar-head" and alot of questions due to your memory loss.

As Fred, you search all around Hope Falls, looking for information, doing tasks for others to progress, and kicking ass along the way.

There are a few complaints i have about this game.


-If you hit the punch button and then tried to jump as soon as you threw a punch, you would               start kicking until you left the combat controls alone for a second


Other then that. This game was well done and definitely worth playing.