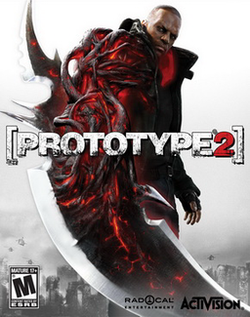 Prototype 2 is the sequel to its succesor game "Prototype" Prototype 2 is a game that takes place after the events of Prototype in which the protoganist James Heller is shipped into what is known as the "red zone", a majorly infected zone inflicted with the "Mercer Virus". Heller was shipped here in hopes to find Alex Mercer based off of several sightings reporting his presence. Prototype 2 features new mechanics along with new powers and gameplay. First we shall take a look at the story.

The story itself is a very good plot combination of revenge and discovery. The plot has a good pace, it doesn't reveal too much at once it keeps you on the edge of your seat wondering if heller can make sense of all this. My only problem, the one and only problem is the fact that at points in the story i found it hard to keep interested because part way through  The game play features a few new mechanics and most of the older game but i found a few problems with these mechanics. After having played through most of the game you come to realize that 1: most of the moves used in this one are new in aspect but basically some of the same moves remixed for heller. The lack of options in such catagories as armor and cision (Navigation System) dissapointed me in this game where as the last one you had the option to turn Mercer into a walking human/mutant wall that absorbs basiclly anything you throw at him, where as in hellers case they make you stick to the dodge for your life and block mechanics. While this isnt exactly bad i missed the old feel i got with mercer where i could walk up to a talk and take a direct shell from it without a scratch. The last part i find bad about the game play is the controls, Heller at points during combat when compared to mercer in one would be very sluggish where you can barely control your movement to theres so much going on and you cant move quick enough to dodge it all. I wouldnt hold this against the game if it weren't for the fact that this can happen in basiclly every fight where you try to dodge then an enemy pins you and you get torn to shreds in seconds. If Mercer were a bit faster or tougher he could survive things like this, thank god for the redeeming shield usage on this part.

Althogether i give prototype 2 a 9/10 for great gameplay and story elements that could have been polished a bit more for that awesome prototype feel to be even more awesome.